Surgical extraction of sperm in case of Azoospermia/ high DFI

Around 10% to 15% of men with infertility problems have no sperm in the semen when they ejaculate, and this condition is known as Azoospermia. Nearly in 40% of the cases, the cause is a blockage in the reproductive tract. Problems related to the production of sperm is another scenario.

A man might still become a child’s biological father, even with Azoospermia depending on the cause. For example, a man with no sperm in the ejaculation due to obstruction might be able to have their sperm retrieved with the help of some special surgical techniques.

In such cases, In vitro fertilization (IVF) or ICSI is the best option for pregnancy. Men having issues with sperm production can also opt for the sperm retrieval process.

The goal of surgical extraction of sperm is to retrieve the best quality of sperm in adequate amounts and minimize damage to the testis and the reproductive tract. The extracted sperm is either immediately used or frozen. 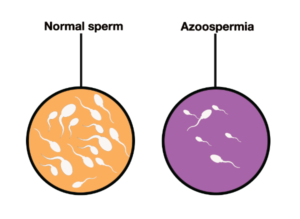 In this condition, the testicles produce sperm, but a blockage in the reproductive tract of men might prevent the sperm from entering into semen. In some conditions, the absence of the vas deferens as a congenital disability might be a problem.

Genetic disease that causes cystic fibrosis also results in obstructive Azoospermia. Blockages might also be present in the epididymis and ejaculatory duct. Sometimes the vas deferens might get damaged due to hernia repair or any other surgery.

However, obstructive Azoospermia can be fixed surgically.

This is a condition where there is no production of sperm at all or might be produced in very low levels insufficient to appear in the ejaculation. So men might have orgasms, but there will be no traces of sperm coming out of their penis.

An orgasm is a physical action that occurs due to sexual stimulation where the semen is released. Lack of semen even after orgasm might be due to ejaculation or retrograde ejaculation:

The cause can be identified through blood hormone tests or genetic tests and can be treated.

Types of surgical procedures available to extract the sperm

There are different surgical techniques available to extract sperm. Every procedure has its advantages and disadvantages.

A few decades back, the only treatment option for Azoospermia was reconstructive surgery if the sperm was obstructed to come out or donor insemination. However, the medical field has since developed many novel procedures. The intra-cytoplasmic sperm injection (ICSI) inventions have enabled new processes like TESA to extract the sperm directly from the epididymis or testis and helped many men with Azoospermia to become the biological father.

Extremely poor sperm production or no sperm production is a major concern in many men. In such cases, TESA became a big breakthrough in obtaining the sperm through needles directly from a man’s testis.

During the TESE procedure, a small incision is made in the testis to check the tubules for the presence of sperm. It can be done as an individual procedure or during an ART procedure while retrieving eggs from their female partners.

TESE is usually operated around the testicle to collect sperm. But Micro TESE has replaced the procedure accessing the testicles for sperm retrieval in men with no sperm (Azoospermia) in the ejaculate. Usually, patients cryopreserve the retrieved sperm for future IVF/ICSI procedures.

MESA is one of the surgical procedures suggested for men having vasal or epididymal obstruction. This is done as an individual procedure or during reconstructive surgery to fix the blockage.

In this procedure, an incision is made in the scrotum skin to expose the testicle. Then, the surgeon observes the epididymis (the tube in which sperm move) for moving sperm using an operating microscope. If the surgeon finds motile sperm, then the fluid is extracted with special equipment. They can be used immediately or frozen for future use.

PESA is sometimes used as an alternative procedure for MESA when sperm is required immediately for IVF/ICSI in men with obstructive Azoospermia. The procedure can be done under local anaesthesia. However, this is thought to be a less reliable technique because less sperm is collected. In addition, with PESA, the surgeon can’t collect sufficient sperm to freeze.

Microsurgical testicular sperm extraction (micro TESE) is an innovative procedure used to retrieve sperm surgically from the male’s testes. Men with non-obstructive Azoospermia are suggested, a common male infertility problem in which man can’t produce sperm in his semen. Micro TESE is the best alternative when other options fail to retrieve sperm from the sperm.

The procedure involves making a small incision in the scrotum under general anaesthesia, where both testicles are visible. Sperm is then collected either from one or both the testicles based on requirement and availability.

Micro TESE has a high success rate which is favourable to men. Doctors say that in 60% of the cases, they can retrieve sperm during microTESE procedures. Many studies also show that this procedure has the highest sperm retrieval rate.